While I know honey is controversial among hard core vegans,
as someone who ascribes to more of a mostly vegan diet and believes in the
healing power of honey, I am all for it.  My love affair with honey started when I was 21 studying abroad in Santiago, Chile, and living with a dear Chilean friend, Silvana, who is an inspiring creative soul, an early adopter of Ayurveda and really influenced my healthy eating.  Most of her family lived in the campo, the Chilean countryside where they mostly ate off the land.  In the campo, one of her cousins was a beekeeper, and lucky for us he would deliver massive jars with kilos of his deliciously grainy, straight-from-the-hive honey that we would eat by the spoonfuls as we sipped yerba mate.  10+ years later I continue to be a honey lover, and at day 2 of the fancy food fair (which admittedly was more like 30 minutes given that whole day job thing), two uniquely flavored honeys really stood out to me:

Thanks to both of these really nice honey entrepreneurs for
sharing some of your sweet creations, and I look forward to trying both of these in upcoming recipes! 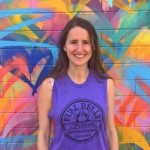